Learn more about the Vienna University of Technology

The specialisation track “Computational fluid dynamics in industry” will be offered at the Institute for Analysis and Scientific Computing at TUW in collaboration with the Institute of Fluid Mechanics and Heat Transfer and the Institute for Microelectronics at the same University. The reference group includes world-leading experts in PDE modelling in fluid dynamics, reaction-diffusion systems and semiconductor devices such as Anton Arnold and Ansgar Juengel.

The core course “Computational fluid dynamics” (CFD) is taught by Prof. Hendrik Kuhlmann (ELGRA Medal in 2017 for outstanding contributions to the field of fluid mechanics research) from the Institute of Fluid Mechanics and Heat Transfer. It covers state-of-the-art numerical methods for the (in)compressible Navier-Stokes equations along with the treatment of complex geometries and turbulence modelling. Prof. Kuhlmann is also in charge of the course CFD-codes and turbulent flows jointly with Prof. Herbert Steinrueck.

The course “Continuum and kinetic modelling with PDEs” is taught by Prof. Anton Arnold, local InterMaths coordinator. It covers a wide range of application of classical and modern PDE models to fluid dynamics. The course “Continuum models in semiconductor theory” provides an introduction to semiconductor physics and devices and an additional part on theory, modelling and simulation of MEMS & NEMS. The course Numerical simulations and scientific computing taught by Josef Weinbub provides advanced methodologies in numerical simulations needed in this track.

To numerically simulate real fluid mechanical problems as well as to give an overview of the methods used in private and educational facilities.

Students will be able to specify and apply a selection of PDE-applications in natural sciences and technology, and to discuss them from a mathematics perspective.

They are able to describe the modelling assumptions or restrictions, as well as their essential analytical and numerical properties.

Students will be able to have a basic understanding of the underlying physics involved in the operation of semiconductor devices and will have a consistent base level of comfort and familiarity with the topic before they move to more advanced courses. The primary focus of the course will be on the development of physics and concepts, however a basic introduction to the application of simulation and numerical calculation within the field of semiconductor devices will also be partially covered.

In this course we will learn how the quantum mechanics of solids and transport has been harnessed to build the Digital Age. We will explore the physics of semiconductors and semiconductor devices and the role they play in modern technology. We will also lay the ground-work for more advanced discussions of how computational techniques and simulation can be used to push knowledge in this field forward to new horizons.

The design of micro- and nanoelectromechanical systems (MEMS/NEMS) is a highly interdisciplinary field which reflects in the variety of topics of this course. Starting from an introduction to continuum mechanics and piezoelectricity we investigate different aspects of the mechanics of basic MEMS/NEMS structures like membranes and beams. By understanding the interaction of MEMS/NEMS with their environment, we are able to understand the outstanding performance of MEMS/NEMS sensors for mass and fluid sensing. Another important aspect for the modelling of MEMS/NEMS is the representation of MEMS/NEMS with discrete lumped element models and we discuss the most important discrete models. For quantitative predictions often numerical methods need to be employed for which the FEM is the most known. We discuss the fundamental theory of the FEM and its limitations. Using the above theory, we study example applications like reference oscillators or fluid sensors. Additionally, we take a look at novel concepts like phononic crystals or quantum MEMS/NEMS.

Students will be able to select and apply fundamental methods of scientific computing and to judge the challenges regarding computing time and implementation effort.

Furthermore, the students have solution skills for inter-disciplinary problems, are able to evaluate and analyze computational approaches, and are able to scientifically formulate and extensively analyze compute-intensive problems as well as develop appropriate approaches.

The thesis topic can be proposed by the track coordinator or by the student. In any case, the local coordinator has the responsibility to provide an advisor. The student’s taste and expectations are met whenever possible. The student must write a short thesis project, with the help of her/his advisor, to be submitted to the Executive Committee, which has to approve the thesis project before its formal start. The thesis topic will preferably deal with a problem proposed by a private company, if possible chosen among the Consortium Industrial Partners.

The final master’s degree examination, while respecting the local regulations, will consist as a general rule in two parts: an oral examination on the topic of the thesis, and the defense of the thesis.

In this examination the candidate will be required to demonstrate good knowledge of his/her specialization track and a capability for working independently and solving problems on experimental, numerical, technological, design or modelling applications. The semester may include an internship within a collaborating company or institution. In this case, a tutor from the involved partner and an academic supervisor will be appointed.

Students who have satisfied all the requirements of the degree programme will be awarded a Joint Master Degree in Interdisciplinary Mathematics by the Universities where the student has spent at least one semester.

Learn more about the degree awarded 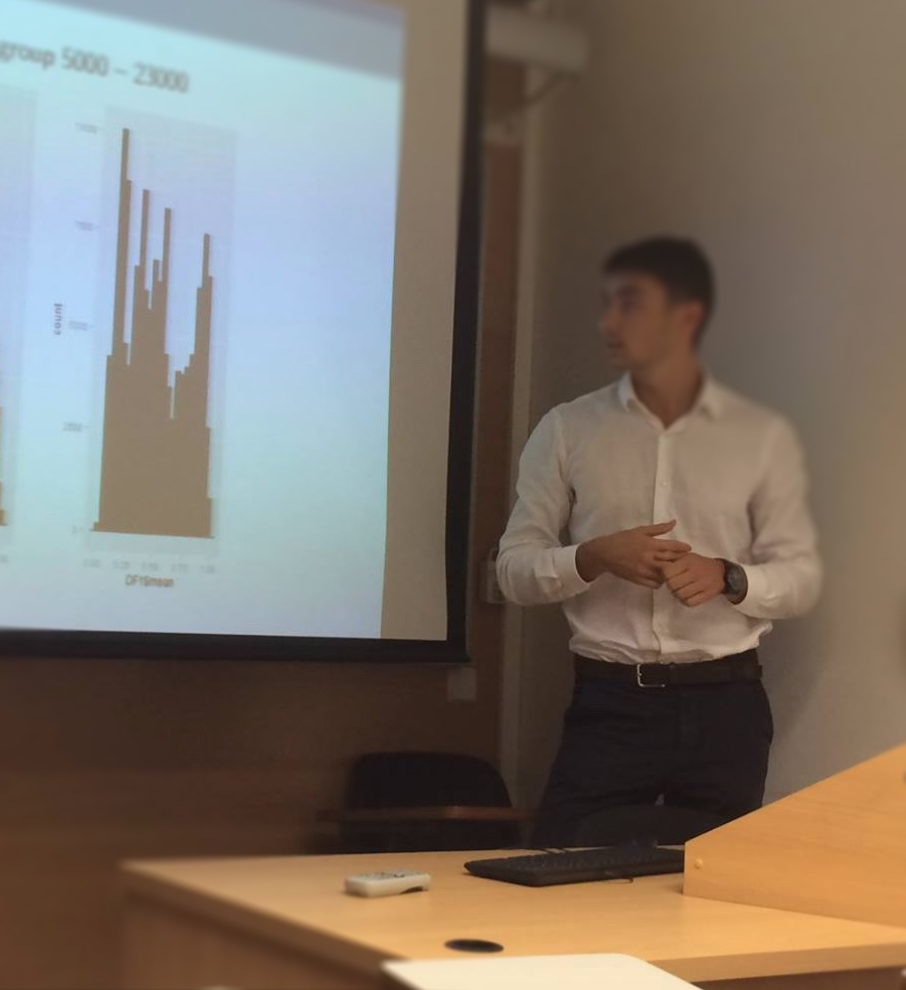 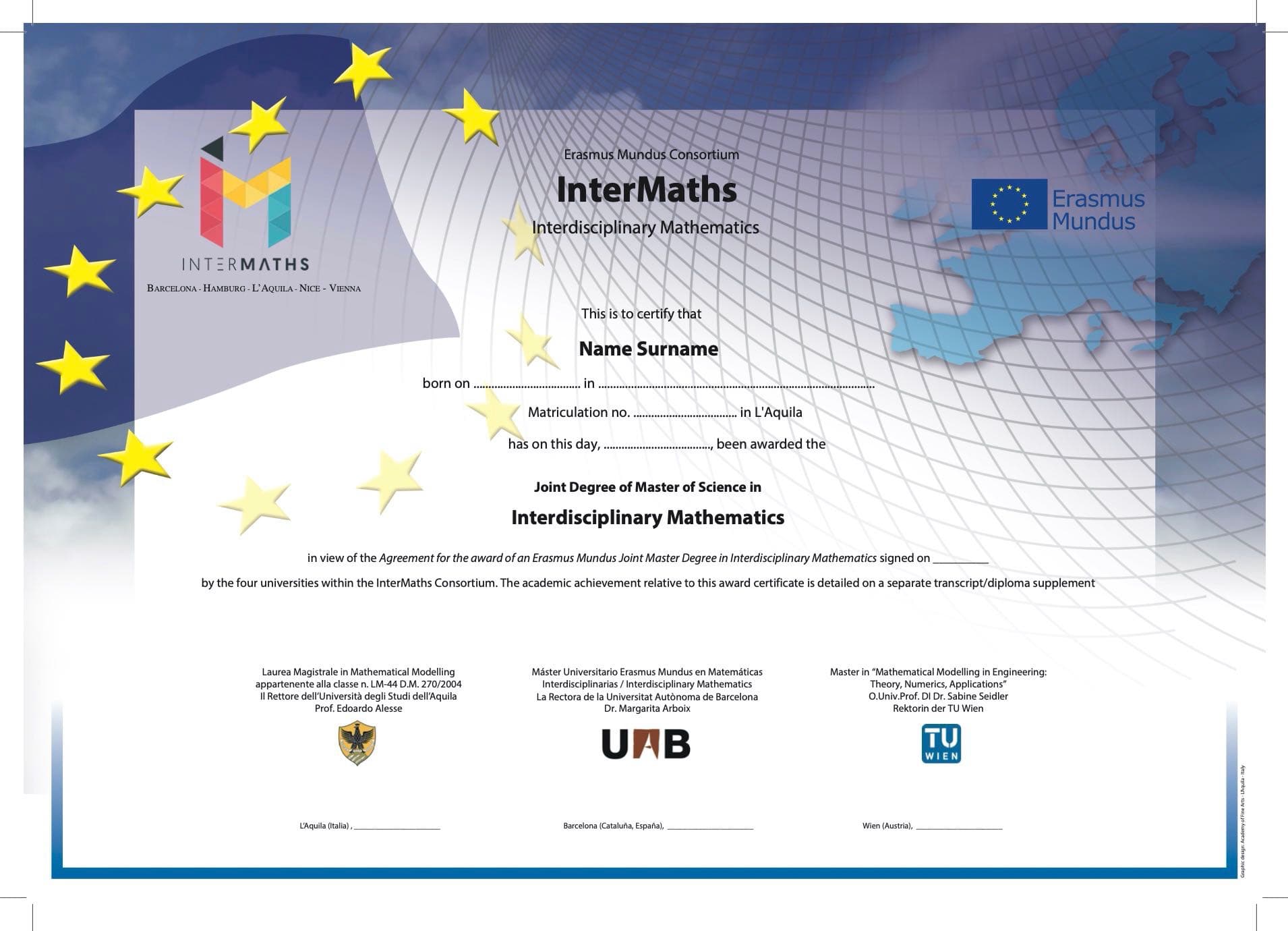 We use cookies to ensure that we give you the best experience on our website. See here for more info
I accept